What I Learned from the Pink Mohawk 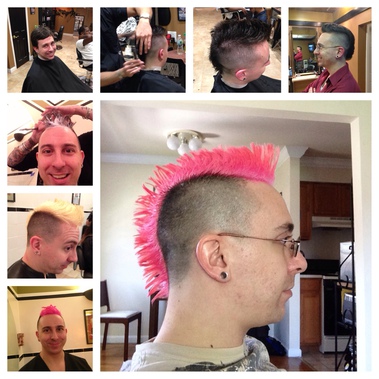 For the past six weeks, the top of my head has been bright pink. At certain points, it has also been various shades of salmon and peach. Why is that? Despite having a rapidly approaching engagement photo shoot, and recently starting a new job, I have been sporting a Mohawk for six weeks. Every morning, I carefully blow dry my hair. I comb it back and meticulously lace it with product to hold it in place. I even had more pink dye applied when it started to fade.

Why would anyone do something like that? I guess different people have different reasons. For me, I got a Mohawk to feed hungry people. On April 27th, 2013, I participated in a charity concert with a group called YouChoose to raise money for an organization called CUMAC. CUMAC is a food pantry that serves Paterson and Northern New Jersey. The concert, called CUMAC ’80s Night 3.0 in 3D (this is the third year we have had this event), was a pasta dinner accompanied by a marathon of ’80s songs. Each song was picked, by way of donation, by family, friends, and fans of the band. All ticket sales went to benefit CUMAC, all food sales went to benefit CUMAC, and all of the money collected by people who participated in the Mohawks and Makeovers for Hunger program went to benefit CUMAC.

The Mohawks and Makeovers for Hunger program works like a charity walk. People who sign up get their friends and coworkers to pledge money to see them get a Mohawk. On the morning of the show, everyone meets up at Public Image Limited, a salon that graciously donated its time and resources to provide the Mohawks and ’80s themed makeovers, to be transformed. The target donation amount this year was $180.00, but I decided I wanted to take it farther than that. Much farther.

I came up with a plan:

Through the generous donations of my friends and coworkers (especially the incredibly kind folks at CoreMedia Systems, Inc.), I raised a total of $1,138.96. CoreMedia itself turned out to be the largest donor, and the CEO appointed someone to decide the colorful fate of my hair for the next six weeks. Pink was chosen because everyone figured it’d be the most embarassing color for me to have to wear.

Anyway, that all happened six weeks ago. This morning, I shaved the Mohawk. So, what did I learn during this experience?

Semi-permanent dyes fade really quickly. Hair straighteners burn. Blow dryers also burn. Roots grown in fast. It can take multiple washes to get hair glue out of your hair. Styling product sometimes gives up halfway through the day. The wind is not your friend when you have a hairdo like a mainsail.

For someone that’s used to a buzz-cut, all of this was a rude awakening.

It Feels Good to Do a Good Thing…

…but it feels even better when you get to talk about it constantly. Having the Mohawk made my work for CUMAC very visible to people. I had many opportunities to talk about what I had done and how much I raised, and people responded very positively to that. Being able to prolong that experience of appreciation was an uplifting experience.

As I said, I started a new job just a couple of weeks before the charity event, so I had to forewarn my new employers of my upcoming fashion statement. They were understanding, although I think it made them squirm in their chairs slightly. Still, throughout the entire six weeks, not a single person said or did anything that made me feel as though there was a problem. There must have been one or two individuals that really weren’t okay with having an employee with pink hair. If that was the case, they kept it to themselves.

I am grateful to everyone at my company for supporting my commitment to six weeks of pink. Not only was it terrible timing since I was still very new in my position, but changing jobs also meant I would no longer be around almost all of the people who had contributed in the first place. It would have been easy to make the argument that there was no longer a point to going through with it (not that I would have given in), but that didn’t happen. I take a lot of pride in being honest and sticking to my word, and I’m proud to work for folks who respect that. 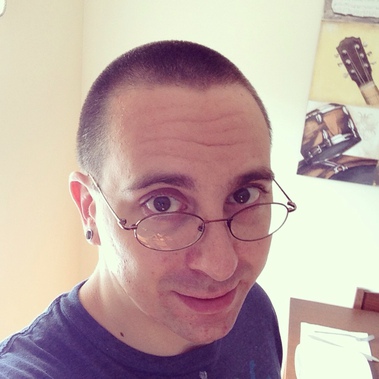 I most likely won’t be getting a Mohawk next year, and I’m okay with that. It was a great experience, and for all the difficulty it caused at times, I’m glad I did it. I’m glad I did it, because now I’ll always be able to say: There may be one less Mohawk in the world, but there are also a lot fewer hungry people.